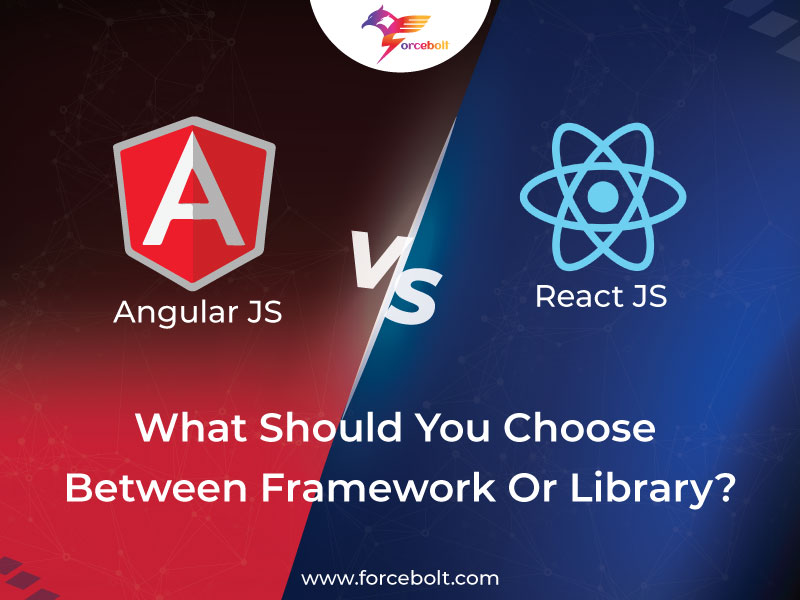 Out of the many front-end development frameworks, the two have acquired a constant place in the top JS frameworks list for two years now. React JS and Angular JS are well-known and widely accepted by developers globally. However, people get confused about which to choose for their next project.

There have been countless encounters over the internet where professionals discuss what is better, React or Angular, for web development. However, developers globally use both depending on the project’s requirements as both the JavaScript tools have been phenomenal.

In this post, you will learn how Angular and React both aim to solve similar front-end problems with different philosophies. The reason for comparing them is because they come from a lineage of the biggest two competitors- Google and Facebook. However, choosing one among the two is a matter of personal preference.

What is Angular JS and React JS?

Javascript, the parent technology of many client-side scripting languages, is a pioneer of dynamic attributes. Angular JS is an open-source JavaScript framework. The front-end development platform is developed and maintained by Google. A special community of developers helps for the framework’s improvement with new tweaks adding up then and now. The documentation feature tops the list of features provided by AngularJS.

On the other hand, React JS is a user interface library developed by Facebook. The UI library helps designers and programmers attain reusable UI components. Currently, it powers over 1 million websites worldwide. It is a popular server-side library with successful applications worldwide.

So, now as we know the difference between the two, let’s know what the battle is really about and pulls out a few insights to help you choose the best-suited framework for your next web development project.

There stands no doubt that Angular has a higher learning curve than React. When you start learning React, you will find it easier initially, but it gets more challenging with more advanced functions adding up. To master the JS library, you will need to know the integration of new tools, which increases the complexity for developers.

On the other hand, Angular.js have complicated syntax to learn initially, but as you move to the advanced functions, you become familiar, making it easier to understand. It also gives additional powerful tools like dependency injection, which lures developers to use and learn it.

MVC stands for three components, M Stands for Model, V for View, and C for Controller. The controller is a user-friendly interface that connects models for data manipulation, and results are represented in View. MVC is considered as one of the best architectures when it comes to app development. It helps app development agencies to develop a seamless user experience. Angular.js is an excellent MVC framework, but it relies entirely on the View only when it comes to React.js. So, you don’t get a suite of microservices to offer high-end functionality to front-end application development.

Document Object Model is a programming Application programming interface. It helps developers to add, manipulate, and design elements in documents. A DOM enables you to structure your data for easy user access and creates a more user-friendly UI. Angular.js provides DOM customization to the developers. On the other hand, React.js provides a virtual DOM that can effectively help ease the front and back communication through server-side or client-side.

Angular.js allows coders to develop dynamic UI components using HTML script. In comparison, React.js will enable programmers to JSX scripting and provides simple syntax that extends the ECMAScript. Developers can easily convert the HTML like Javascript objects as it has a text like a script similar to XML. So, if you want a rapid front-end development, you can opt for Angular.js or React.js based on the script you are working on.

Tech Giants worldwide keep up with the trends, and their development team uses both React and Angular. Here are some notable projects across the globe that are based on Angular.js and React.js.

The Angular VS React more than just a battle of framework VS library in the Javascript universe. If you are confused about what to choose between a framework or library, it depends entirely on your project’s type. However, there is no denying that Angular.js has some leverages over React.js. The decision for choosing is based on the business logic and integration of several functions into the app.